Home » Weight Loss » The Truth About Having Duodenal Switch Surgery

The Truth About Having Duodenal Switch Surgery

Duodenal switch surgery – also known as biliopancreatic diversion with duodenal switch – is the least commonly performed bariatric surgery procedure available. The procedure itself is both restrictive and malabsorptive. This means that although it’s effective at causing weight loss, it’s also more complicated than other surgeries which purely focus on the restrictive aspect. As a result, it’s generally only used when another, less invasive procedures have failed. Read on to learn:

What is Duodenal Switch and How Does the Procedure Work?

A duodenal switch involves a two-part procedure; one that creates the restrictive component of the weight loss and the other to promote malabsorptive weight loss. 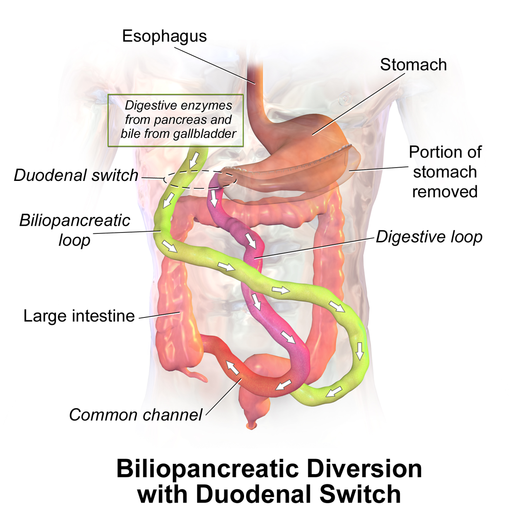 While the restrictive portion of duodenal switch surgery is permanent, the duodenal switch can actually be reversed, at least in part. Thus, if you experience any complications following the procedure and do not want to continue it long-term, you may have the option to have this part reversed.

Typically, due to the complex nature and potential complications of the duodenal switch procedure, it’s reserved for individuals who need to lose a substantial amount of weight, or those who are suffering from a serious, weight-related condition.

The procedure itself is extremely effective and has been known to reverse conditions such as type 2 diabetes, hypertension, and even sleep apnea. As a result, those who have a body mass index (BMI) greater than 40 or are suffering from an illness such as diabetes are great candidates for this procedure.

Some studies have revealed that duodenal switches are more effective for older individuals who have a lot of weight to lose when compared to those who opt for the Roux-en-Y gastric bypass, instead.

The risks of having Duodenal Switch surgery

Complications can arise during duodenal switch surgery, immediately afterwards or even several months or years later. It’s important you consider these risks before deciding to take such a drastic step to reduce your weight.

During the operation, several complications can arise, including:

Following the operation, other risks can arise, including:

Long-term issues are generally related to other common problems with malabsorptive weight-loss procedures, including:

Unlike other bariatric surgery procedures that generally only last around an hour, having duodenal switch surgery can take up to four hours. To reduce the length of the operation, some surgeons even choose to break the surgery up into different parts. However, a full recovery is generally possible no more than 6 weeks following the procedure, which is roughly similar to that of both gastric bypass and gastric sleeve surgery.

Generally speaking, patients remain in the hospital for up to three days following the procedure. This relatively short stay is thanks to the surgery being performed laparoscopically, meaning there are no major incisions.

Your diet will change from week to week during the first month of recovery as follows:

How Soon to Expect Weight Loss

As is the case with all weight loss surgeries, the more you stick to a healthy diet and exercise routine, the better your results will be. For example, you should exercise at least three to four days per week, for about 30 to 45 minutes per day. And, you should always be aware of what, and how much, you’re eating. Even with restrictive surgeries, you can stretch the stomach out if you’re eating too much, quickly undoing the benefits of the procedure.

Duodenal switch surgery is a great option for those who need to lose a significant amount of weight and have few, if any, other options. Due to the complex nature of the procedure, as well as its relative permanency, it’s important to discuss this option and others with your doctor before making any decisions.

A less invasive, but effective alternative

We all know that diet and exercise alone doesn’t work for everyone. Some people genuinely struggle to control their appetite and urge to overeat.

Although those people may turn to ‘last resort’ options such as duodenal switch surgery, it may be worth testing your body’s response to a comprehensive dietary supplement such as PhenQ first.

PhenQ works by both suppressing your appetite and increasing the amount of stored fat you burn. It does this using completely safe, natural ingredients and is well worth a try before you resort to risking the complications of duodenal switch surgery.

Whichever option you decide to take, keep an eye on our blog – there’s a wealth of helpful information on here for anyone on a weight loss journey!

Bariatric Surgery – What Are The Types, Costs and Requirements?

Lap Band Surgery Cost, Risk, and Diet Before and After The Procedure

How the VBloc Therapy Device Works for Weight Loss

Lap Band Surgery Cost, Risk, and Diet Before and After The Procedure

The Only Pre and Post Bariatric Surgery Diet Guide You Need

Bariatric Surgery – What Are The Types, Costs and Requirements?